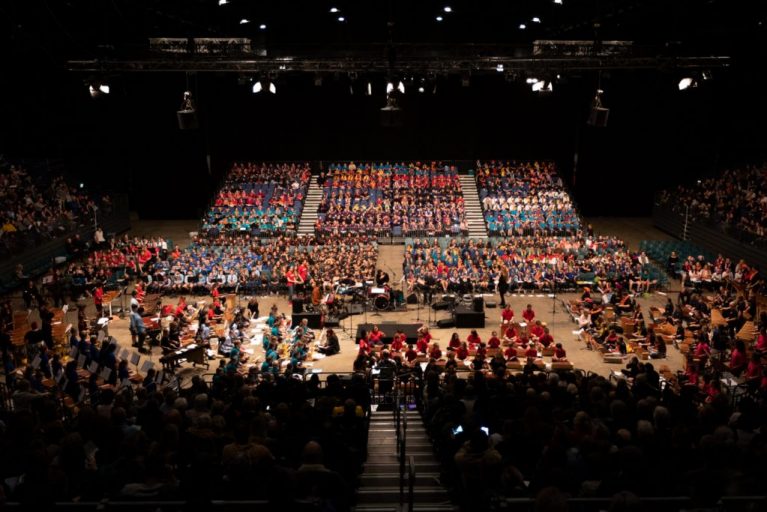 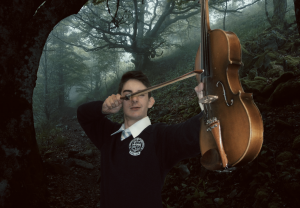 Today I ran across one more xeroxed handout touting the test-taking benefits of music education, defending music as a great tool for raising test scores and making students smarter. It was just one more example among many of the “keep music because it helps with other things“ pieces out there.

I really wish people would stop “defending” music education like this.

I get that music programs are under intense pressure, that all across America they are sitting hunched over with one nervous eye on a hooded figure stalking the halls with a big budgetary ax. Music programs are watching administrators race by, frantically chasing test scores and ignoring music in schools. So it may seem like a natural step to go running after the testing crowd hollering, “Hey, I can help with that, too.”

First of all, it’s a tactical error. If your state gets swept up in the winds of test dumpage and suddenly tests are not driving your school, what will you say to the ax guy (because, tests or not, the ax guy is not going away any time soon)? If your big selling point for your program has been that it’s actually test prep with a horn, you’ve made yourself dependent on the future of testing. That’s a bad horse on which to bet the farm.

Second, it’s just sad. And it’s extra sad to hear it come from music teachers. Just as sad as if I started telling everyone that reading Shakespeare is a great idea only because it helps with math class.

There are so many reasons for music education. Soooooooo many. And “it helps with testing” or “makes you do better in other classes” belong near the bottom of that list. Here are just a few items that should be further up the list.

Music is universal. It’s a gabillion dollar industry, and it is omnipresent. How many hours in a row do you ever go without listening to music? Everywhere you go, everything you watch— music. Always music. We are surrounded in it, bathe in it, soak in it. Why would we not want to know more about something constantly present in our lives? Would you want to live in a world without music? Then why would you want to have a school without music?

Listening to music is profoundly human. It lets us touch and understand some of our most complicated feelings. It helps us know who we are, what we want, how to be ourselves in the world. And because we live in an age of vast musical riches from both past and present, we all have access to exactly the music that suits our personality and mood. Music makes the fingers we can use to reach into our own hearts.

Making music is even more so. With all that music can do just for us as listeners, why would we not want to unlock the secrets of expressing ourselves through it? We human beings are driven to make music as surely as we are driven to speak, to touch, to come closer to other humans. Why would we not want to give students the chance to learn how to express themselves in this manner?

Music is freakin’ magical. In 40-some years I have never gotten over it — you take some seemingly random marks on a page, you blow air through a carefully constructed tube, and what comes out the other side is a sound that can convey things that words cannot. And you just blow air through a tube. Or pull on a string. Or whack something. And while we can do a million random things with a million random objects, somehow, when we just blow some air through a tube, we create sounds that can move other human beings, can reach right into our brains and our hearts. That is freakin’ magical.

Music connects us to other humans in amazing ways. I have played in concert bands, a couple of jazz bands, and pit orchestras; I have directed church choirs and community musical theater. It is both indescribable and enormously compelling to see the many ways in which humans making music come together and connect to each other. I imagine the experience of playing team sports is something similar. You are part of something — something bigger than yourself and more than the sum of the parts. I can’t think of any other school subject that so completely fosters cooperation, collaboration, and connection between students. Students learn to help and mentor each other, support each other, lift each other up, and come together into something glorious and way, way cool.

In music, everyone’s a winner. In sports, when two teams try their hardest and give everything they’ve got, there’s just one winner. When a group of bands or choirs give their all, everybody wins. Regrettably, the growth of musical “competitions” has led to many programs that have forgotten this — but music is the opposite of a zero-sum game. The better some folks do, the better everybody does. In music, you can pursue excellence and awesomeness without having to worry that you might get beat or defeated or humiliated. Everybody can be awesome.

Music programs can be a huge source of pride for school and community. Just like a football team, a band or choir can draw a crowd of fans who take great pride in the traditions and accomplishments of the groups. And if you’re not getting your program out in front of the public to help build that following and support, you’re messing up.

My high school band director is a hell of a guy, and he absolutely altered the trajectory of my life. When people talk about him, they often talk about all the music teachers and professional musicians that came out of his program, but I think his greatest success was all the students like me who went on to do something else, but whose lives have always been enriched by music.

Music is awesome. It’s human. It’s universal. It’s big business precisely because it is something that everybody wants.

Music does not need to make excuses for itself, as if it had no intrinsic worth. It does not have to dress itself up in test-taking robes or mathematical masks. It has deep, powerful human value, and all of us who love it should be saying so, over and over and over again.

Do not defend a music program because it’s good for other things. That’s like defending kissing because it gives you stronger lip muscles for eating soup neatly. Defend it because music is awesome in ways that no other field is awesome. Defend it because it is music, and that’s all the reason it needs. As Emerson wrote, “Beauty is its own excuse for being.” A school without music is less whole, less human, less valuable, less complete. Stand up for music as itself, and stop making excuses.