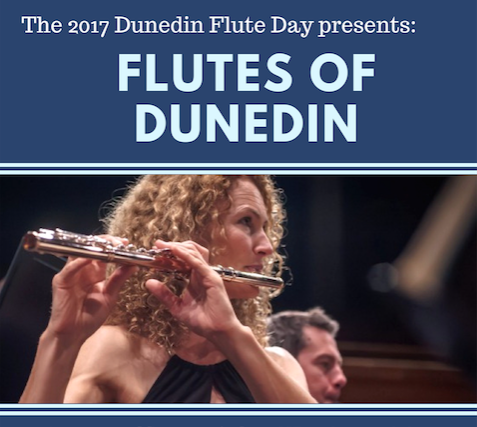 The Flutes of Dunedin concert is happening this Sunday the 29th of October at 5pm. Guest performer and teacher for the day Bridget Douglas will be performing the Poulenc flute sonata with Sandra Crawshaw. Justine Pierre, Philippa McNulty, Fiona Pickering, Natasha Manowitz and Rosalind Manowitz will be performing arrangements of Latin tunes for flute quintet. Justine Pierre will also be performing a Japanese flute solo. Nichola Genn Harris will be playing Survivor of Rekohu by Dunedin composer Anthony Ritchie (a piece that features the western flute and Maori flutes) and Jennifer Cattermole will be performing a piece on Taonga pūoro (Maori instruments). The two flute choirs formed especially for the flute day will be presenting an item each, and there’ll be one or two more surprise items too!

Prior to the concert, Jennifer Cattermole will be doing a demonstration on the various Maori instruments featured at 4.15pm for around 20 minutes. Everyone coming along to watch the concert are welcome to come early to learn about the different instruments and how they work (at no extra charge).

This concert is for people of all ages and will showcase a variety of flute music from NZ and around the world for solo flute (on the western flute, Maori flutes and Japanese flute) and within small and large ensembles.

Entry is by donation (cash door sales only), with all donations going towards the running of the day of workshops and masterclasses. The concert is going to be held at Bayfield High School Hall, 2 Shore Street, Andersons Bay.

This concert marks the end of the Dunedin Flute Day, a day of masterclasses, workshops for flute students and teachers. For more information on the event please see the Facebook event page. If you’re interested in signing up as a flutists there are still spaces available – contact natashamanowitz@gmail.com