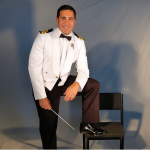 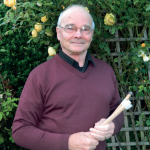 The Honours Board has been instigated to celebrate the “Unsung Heroes” of music education in Aotearoa/New Zealand. There are many individuals who give of their own time and energy to music events in our community. They might show strong musical leadership, be an innovative thinker or a commendable teacher. We really want to hear about them and share their stories. Nomination can be done by the online form on the MENZA website or click here.

While Lt Commander Owen Clarke has a relatively high profile as Director of Music for the Royal New Zealand Navy, it is his passion for music at the grass roots level, especially youth music that sees him recognised here. He regularly conducts workshops (predominately for concert bands and orchestras) at schools all around the country. Owen is also involved in community youth music and frequently lends his musical talents and time to encourage and inspire community youth concert/wind bands, orchestras and brass bands. Within his role as Director of Music for the Royal NZ Navy, Lt Commander Clarke has instigated a schools’ concert series for Primary and Secondary schools, which is both innovative and original. Lt Commander Clarke is a passionate music educator who devotes much of his time to supporting youth music both with schools and the wider community.

Len Buchanan is a retired classroom teacher and has been a maker of the Jon Madin style marimbas, an advocate for marimba making and music leader in numerous primary schools in Dunedin. He has made more than 500 instruments which can be found in schools all over New Zealand. His work with ensembles in the Otago region has fostered the development of musical sensitivity and percussion skills for many children. He has been able to do this because of his endearing respect and valuing of young people and will to give them every musical support at his professional disposal. He is held in high regard by students and their teachers alike. At the forefront of a renaissance of tuned percussion in New Zealand, he is deserving of MENZA’s deepest admiration and gratitude as a model of commitment to music education.

Chris Archer will be no stranger to many of you, as he has had many official roles in music education in Aotearoa/New Zealand.  Chris’s nominator noted his advocacy for, and outstanding contribution to music education in New Zealand. This has been seen in a number of roles, such as Musicnet Facilitator and National Examiner and Materials Developer for NCEA, as well as National Music Advisor and Arts Curriculum writer. Chris has also made many other contributions: he has worked on various advisory committees including with the CPIT Jazz School, the Burnside High School Music Specialist Programme, and SOUNZ, the Centre for New Zealand Music. Chris has also had a significant involvement with MENZA, in particular being on the executive committee for the 09 MENZA conference and a previous co-editor and contributor to Sound Arts. In many capacities and over a sustained period of time Chris Archer has shown leadership and passion for music education in Aotearoa/New Zealand. MENZA is appreciative of the many ways that Chris has contributed to the musical community in Aotearoa/New Zealand, in both professional and personal ways.

As a highly experienced paediatric developmental therapist, Ros Giffney has been part of Sistema Aotearoa since its inception in April 2011. Having worked in the health and education sectors in the UK and New Zealand, Ros brings a special set of skills to the programme. A key part of her work is integrating and enhancing the behavioural and social development of the students and evaluating the longer-term outcomes in those areas. Within Sistema Aotearoa, Ros has developed a unique model of engagement that is underpinned by values and principles such as respect, responsibility, co-operation and aspiration. This model aims to influence a broad range of social goals in transformative ways, for example, personal, within families and the community, and societal. This holistic approach is a critical factor in effectively engaging the children and impacting on their well-being, and that of their whanau and the wider community. The strength and success of this approach has seen Sistema Aotearoa become a leader among El Sistema-inspired programmes worldwide. Ros Giffney’s notable work ethic, cross-culture capability, and organisational skills on top of her paediatric developmental expertise, make her a vital and defining part of Sistema Aotearoa’s effectiveness and success. Her article on an holistic approach within El Sistema-inspired programmes recently featured in The Ensemble, the major publication for El Sistema activity in Canada and the US. Because of her work in advocating for the holistic benefits of the musical learning and teaching environment, funders and policy makers are becoming aware the wider possibilities of music education, music teachers are more confident in their attitudes and practices (especially in group contexts) and as a consequence, children are enjoying richer experiences when they go to learn to play a musical instrument. MENZA recognises Ros’s huge contribution to establishing and developing a distinct and appropriate child-centric approach within New Zealand’s burgeoning Sistema movement.

Sally Tibbles is Associate Director of Co-Curricular Music at St Cuthbert’s College in Auckland believes that when it comes to music, students should be exposed to excellence and that excellence should be expected of them. It is a belief that has set the tone throughout her 20 year tenure at St Cuthbert’s. Sally leads a highly-skilled team of staff, and admits she gets most delight from seeing her students’ learning come to fruition in the many concerts and performances that she organises throughout the year. Sally is involved in many aspects of the music community, which is something her students benefit greatly from. As well as her role at St Cuthbert’s College she is also an Artist Teacher in baroque flute at the University of Auckland, Vice President of Suzuki New Zealand and sits on the board of the KBB Music Festival. Previously she has served as a member of the Orff board. Kodaly, Orff and Suzuki pedagogies all interest Sally and she has been instrumental in the growth of the Suzuki method at St Cuthbert’s. The College is also active in the Kodaly method, running holiday workshops for teachers to learn new techniques, which Sally regularly takes part in. As an active performer Sally can be heard regularly on Concert FM with the group Extempore. She is passionate about Early Music and lends her talents on the baroque flute to many groups including Age of Discovery, NZ Barok and Kowhai Baroque. MENZA is delighted to acknowledge the contribution that Sally makes to music education in Aotearoa/New Zealand.

How did you end up teaching Music? I have always been passionate about music. My family are musical and gave me every opportunity to develop my music interests. I had excellent teachers at high school and university who focused on a holistic approach to teaching and learning and encouraged real life performance. It seemed like a natural path to follow. Along the way I’ve had experiences that have inspired me further with music, one being singing in the London Symphony Chorus for three years. Where have you taught? Evans Bay Intermediate, Hillcrest High School in Hamilton, West Norwood Girls’ Comprehensive in London, Hillhouse International School in London, Bishop Viard College, Aotea College.

What do you love about teaching music? Through music teaching and co-curricular activities one has the chance to build really positive relationships with students. It is rewarding to see how students develop selfesteem and confidence through music, not only in the classroom but in regional, national, and international events. I have been privileged to be part of a very successful barbershop singing programme, supporting very talented and able students. Teaching music has given me the opportunity to connect with the community through fundraising and performing at many events. This is a very special and enjoyable part of the job. It is also a part of the job that makes a huge difference to students achieving well, reaching their goals, and having valuable life experiences

What led to you becoming a music teacher? Music has always been a part of my upbringing. As the eldest of five children, I was fortunate to be born to parents who were musical. My mother Marion (nee Allan) was an enthusiastic and talented classical pianist while my father, Finlay, was more jazz/rock oriented. Both of my parents were teachers and each of the children was given the opportunity to learn the piano initially, then able to diversify latterly. My personal journey included, piano around 8, violin (which I bought from a classmate) at 10, (attending the KETC Saturday morning classes in Dunedin), church choir, singing role of Amahl in the Christmas Operetta Amahl and the NightVisitors with the Dunedin Opera Company at 12.

By secondary school age, a friend who had never learned an instrument wanted to join the school brass band so, with free tuition available, I joined him and took up the cornet as well. Meanwhile back in the family music wise – as the Bruce Family – we ended up playing on television as one of the finalists in the 1969 Studio One TV talent programme. Leaving school for Otago University I took up music – not as a performer – but graduated with a BA in music not knowing what I might do. It was not for a further four years after graduating, I eventually chose to become a music teacher in 1975, attending Auckland Teachers’ College with Trevor Thwaites and Trevor Benns (who still teaches music at Hauraki Plains College).

What do you love about teaching music?  Music is such an intimately sensory medium that inspires, comforts, and engages the spirit. It is an art form you can’t see (other than its written representation) but you can select and can experience it in such a range of genres, styles and performance media that can link with emotion and bind us together as humans. It has a cultural dynamic and diversity that is so broad, there is something for everyone. Like a language, it is capable of being created, performed and enjoyed and for the enthusiast, you can practically become involved (creating and recreating) or as an audience (appreciating). When I was a school student, school music mostly involved appreciation. Hopefully these journeys will continue to inspire students and my grandchildren to discover through musical involvement the potential for success that they never knew they had.The discipline and team work associated with rehearsal and performance can achieve levels that may at first seem impossible.Witnessing the associated buzz of “I did it” moments with tenacious perseverance (even for adult learners) is such great motivation for all.This can ignite a person’s spirit that can last for a lifetime.